Bryan from Tii Ansio on Vimeo.

Bryan has grown up in London and the video is my interpretation of his story that I can relate to a little bit after living here for almost one year. Visuals inspired by his favourite painter Adolph Gottlieb. Tracks I mixed for the audio:

Directed, shot and edited by me.
Thanks to Max for modeling and Bryan for inspiring the story. 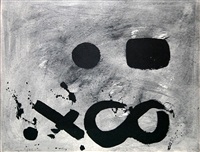 I took this picture of my friend when we went to the park to shoot some material for the film at a playground next to ours, when we had finished filming I just took this picture of him; it was really dark and I didnt even have the original picture of Bryan in the playground with me but it ended up surprisingly similar; could easily be the same park, same person 15 years older. So it became a part of the animation.

Your life swinging by

Fractured memories mixing up together

Things that never change in London

Inspired by the painter Adolph Gottlieb, I wanted to include the element of paintings/drawings in the film, representing blurred memories/gaps in memory between childhood and present time. I printed out the photos and draw on top of them, scanning every step, so that in the end the whole image was covered in black. Then I put these together to create animation, getting an idea of the memory fading away and getting clear again. By repetition you get a chaotic, distressed feeling, like when you're desperate to remember something and the information is almost there but you just can't reach it.

Inspired by the29nov films and the research/collage work I did in my sketchbook, from books about album covers, club interior design and festivals,  I wanted to create some animation by myself, so I scanned all the collages I did and started working on them on Photoshop. The process was so slow that in the end I managed to create only a few frames I could use.

Examples of frames I used for the animation

When I was editing the film in the beginning I was a little bit lost, until I started to add music and sync it to the clips; I started with Blawan's track Getting me down which I had just discoverd on the same day, it is mostly very "poppy" and naive, like a song from your childhood, but  I love the how he has mixed it to sound very distorted, as if you were listening to it from a broken radio, it adds a dark twist to it. It reminds me of David Lynch's films and Twin Peaks. Like something that looks/sounds pure and innocent from the outside was about to break down and reveal all the filth and secrets inside.

I edited the track to make it sound more dark, only a couple times you can hear the poppy original track, representing the happy childhood days in this film - the slower the tempo gets, more and more blurred and faded is this memory getting, until it breaks and brutally changes to another track, Andy Stott's Forgotten which is already very disrupted and noisy, unpleasently unpredictable, but i mixed it up even more ,  until the music, with the image, fades away again, to silence and darkness.

Gaspar Noe's   films Enter the Void and Irreversible both play with past and present, flashbacks, light and sound.

I was looking at these videos for inspiration how to make still images into moving image. I was wondering if I should use some film clips as well but in the end I wanted all the material to be made by myself again.

10 years ago the29nov films was started in a small village in Southern Germany. thousands of videos and millions of views later Sebastian Kökow and Kevin Paschold have become one of the most sought after video producers mostly for banging, industrial-leaning techno but also for all other kinds of electronic music.

Bryan is from London; his family moved to Brussels for a short time but mostly he spent all his life in here. In my point of view, it's very interesting and different, that some people spent most of their life in the same city, especially a city like London, where people come and go all the time.  I know London a little bit after staying here for almost a year now, and the city to be transforming all the time; one week, youre in, one week, youre out. Gentrification. Brexit.

Unlike other big cities like Berlin and Paris, for example, its so much harder to get a grip of London. There's a few things that never change - the red double deckers, the tube, for example - but things like Thames - you never see them, because the city is just too big. You spend most of your time underground,  going from home to work, from work to home.

For me, coming from a small city and moving to the capital when I was 17, it's very easy to separate memories from childhood, because the envinronment was just so different. Moving away from home started a new chapter that didn't have much to do with my previous life experience. But when there's no transition like that, I bet you look at your life very differently.

For example, an area where you used to go as a kid, can get a really different meaning when you're a teenager, and again as an adult. For me, a feeling of nostalgy is guaranteed every time when I visit places I grew up, after being away for such long time, nothing can interrupt these memories . It would be interesting to work on this subject more, to study how certain places arise different memories and emotions, especially in a city like London.